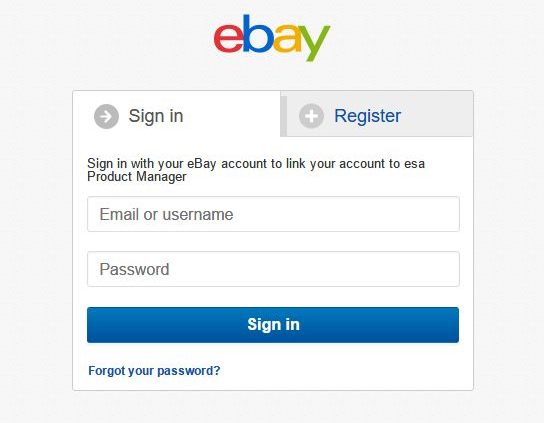 As always, the question is, how do I get an eBay Import into Shopify? It’s actually a very straight forward process:

The first step is to go here: http://www.esaproductmanager.com/shopify_install.php

Type in your Shopify store name and press Install for Shopify.  Don’t have a Shopify store? Sign up here: https://www.shopify.com/. You have to remember the store name that you use with them. They always end with “.myshopify.com” as it’s self-hosted. Later, you can buy your own customized domain name, but you’ll always be able to access your store with the “,myshopify.com” name as well.

This prompt will appear: A review of this prompt shows you what it is for. Obviously, the app needs to create and modify products and variants to import your eBay listings into Shopify. Collections are optional and controllable through esa Product Manager. So this is the confirmation process that you understand what the Application is doing in your store. An alternative process is that if you aren’t signed into Shopify yet, they will first want you to login to verify you are the store owner before installing any software.

To proceed, you would press the Install app button.

Once you’ve installed the App into your Shopify store, the App will open automatically and display the menu. The user is presented with a choice of the free eBay import into Shopify or look at our Paid features. In this case, we are going to choose the Free version and see where that leads us.  So press the Free Import button.

First time users are must now tell us how many eBay accounts to authorize (screen not shown).  Choose at least one, and the Proceed button. In conclusion, your eBay import will now begin! Consequently let us know how you feel in the comments below.